What is this blog?

This blog is about my crafts as I'm sure it's obvious, but rather specifically I post about my quilling. I suppose I didn't include quilling in the title simply because that would limit what I could put in this blog. In other words, 99% of this is in fact quilling.
There ARE periods where I don't post anything for a long time, but that doesn't mean I'm done with quilling! I'll post again. Eventually.

This snwoman was quite fun to quill. A lot easier than the dalek, that is for sure! He wouldn’t stand, so I quilled a base for him, which works perfectly. I love his little hat, and his scarf.i braided it by gluing three strips together, close but not right on top one another, and held it by a binder clip. I glued it in the perfect orientation to easily braid and fold it. 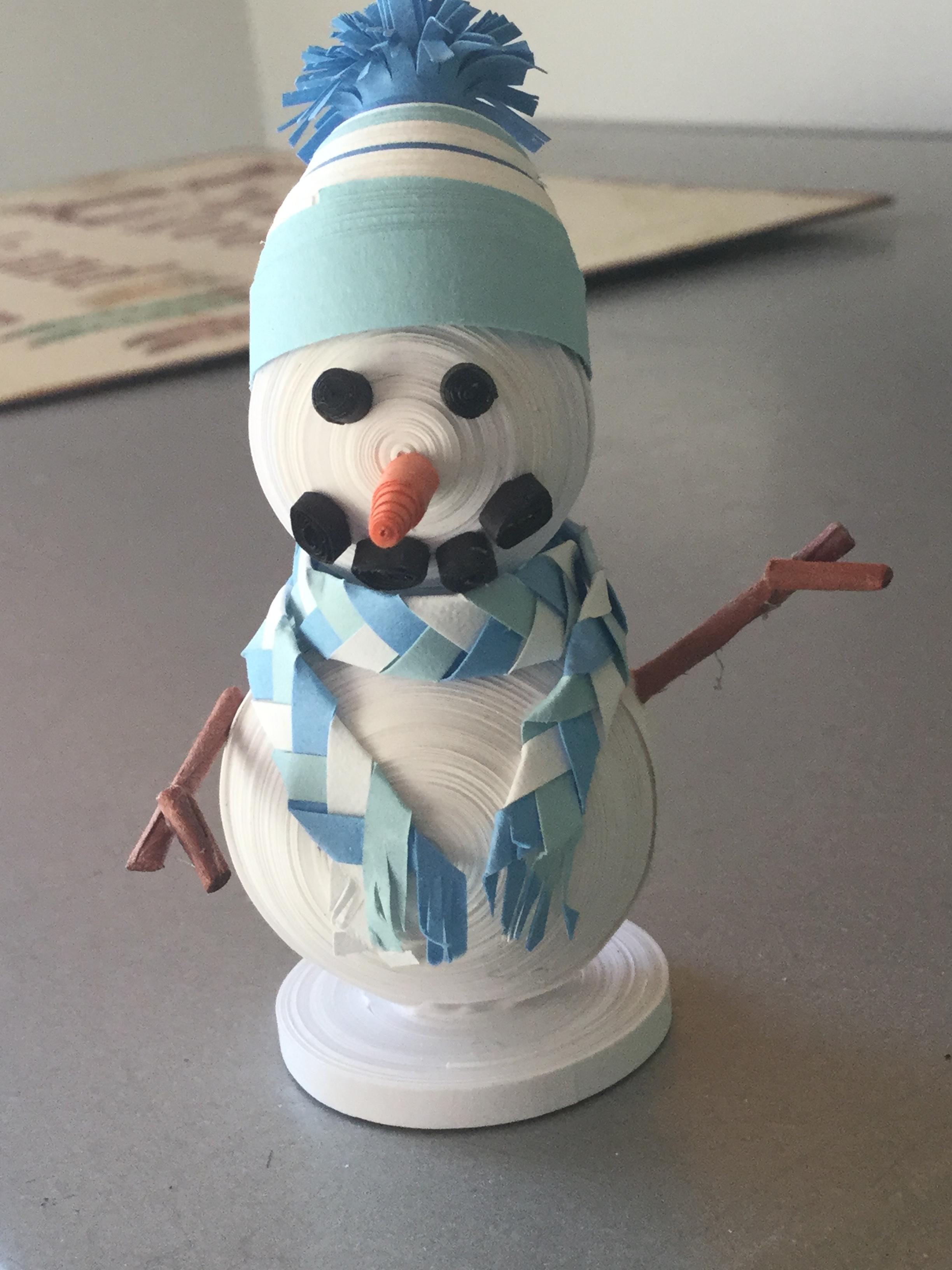 I really like Dr. Who, and I thought that a dalek would be quill-able. It was, but it was a bit difficult! I used a bit of wire for its eyestalk since I didn’t think paper would hold up. I put a bit of paper on it and stuck it between some coils. It took me a while to get it to glue. 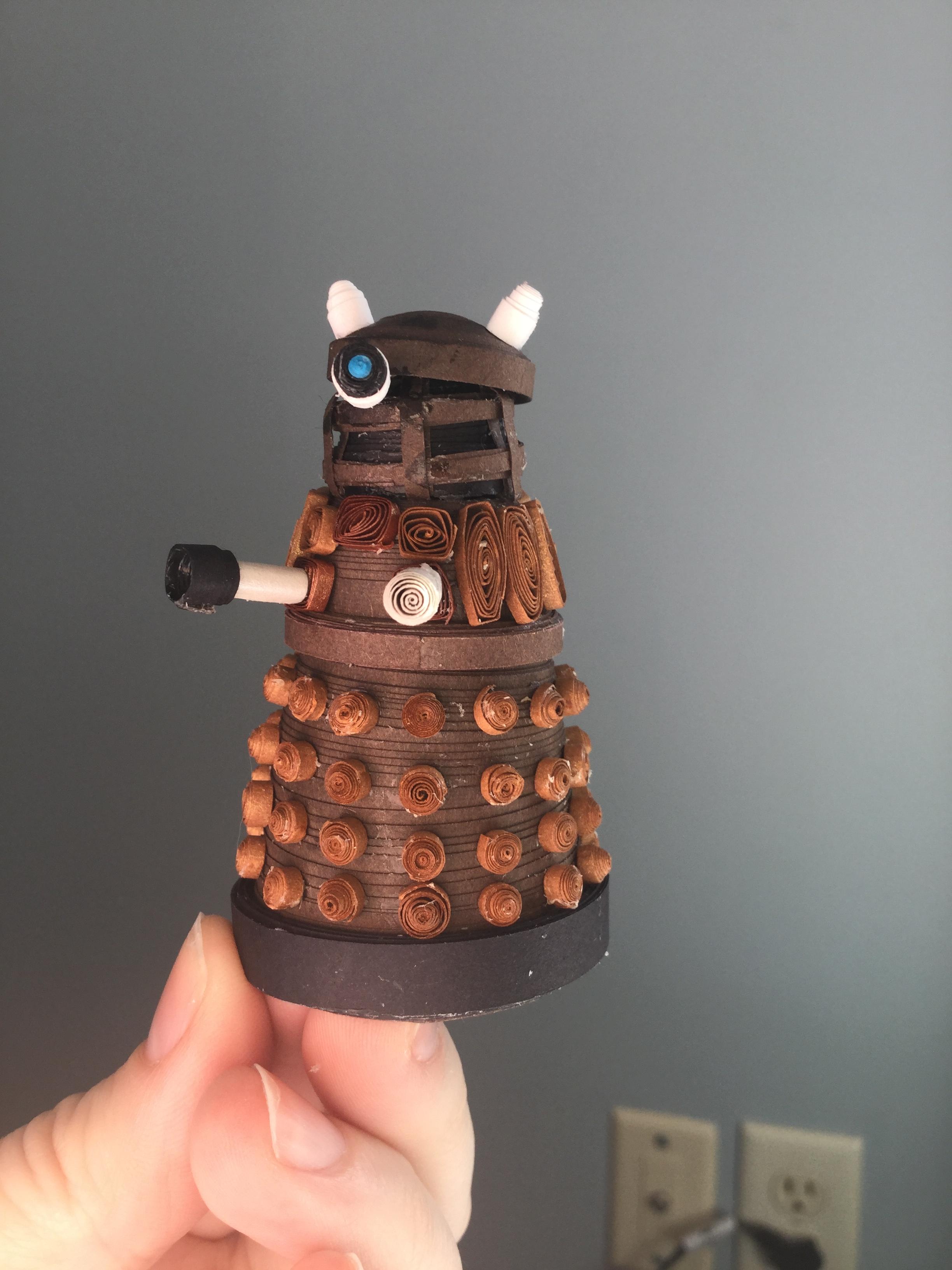 Posted by Rachelle at 6:10 AM No comments:

I made this gnome for my grandma sinc eshe loves gnomes quite a bit! The hair and beard was made similar to how I have in the past, cutting into thirds. But I thought to fold the strips in half this time, and I used a quilling needle and my fingers to curl it. 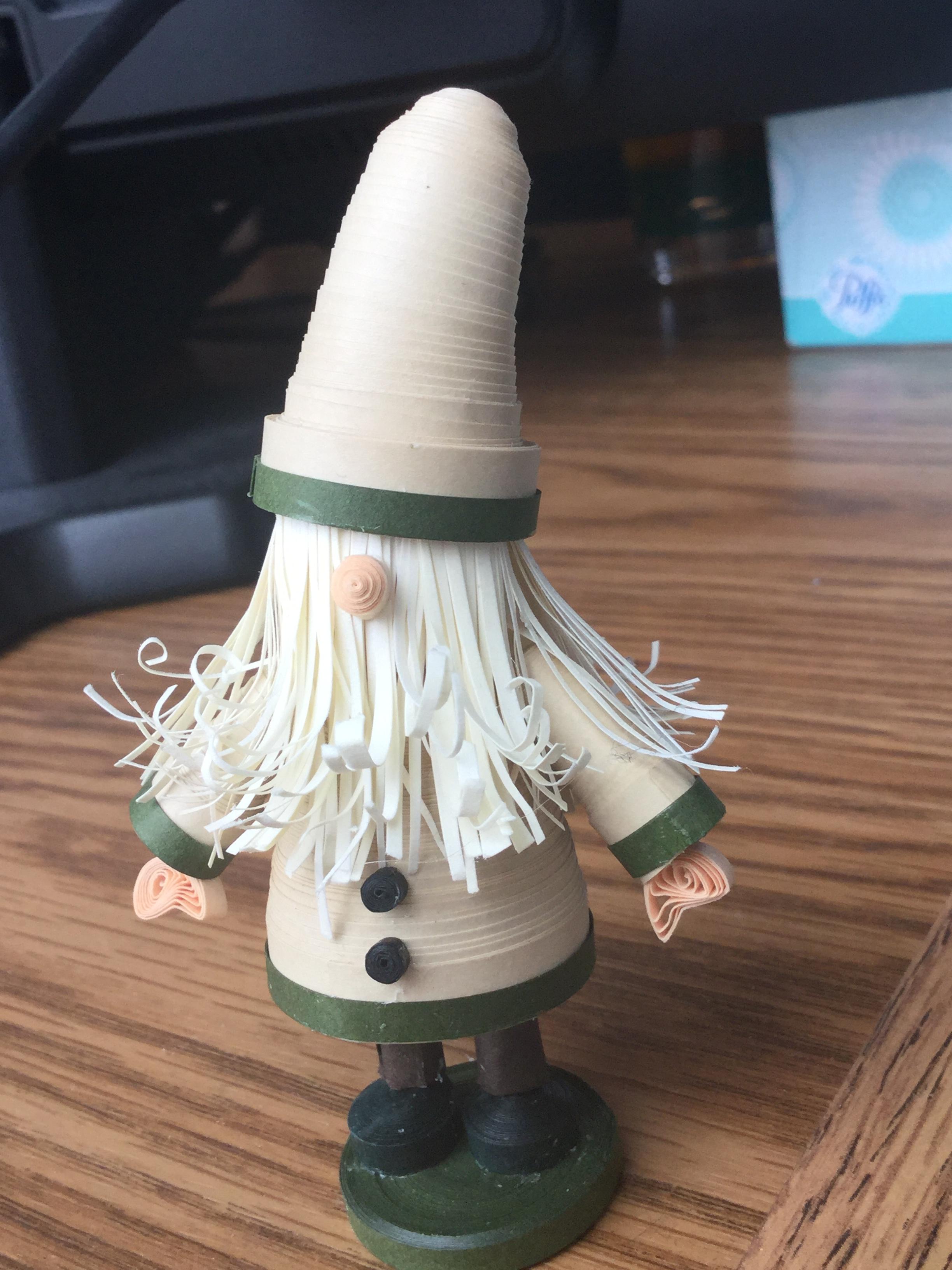 Posted by Rachelle at 6:07 AM No comments:

These are two other pictures I finished earlier this year and last year. The purple one was completely my design. It has sections with two and three layers of coils. It’s a random design, 12” by 12”.

The other one is 8.5” by 11”, quilled over a picture. This one was really difficult, because of all the curves. 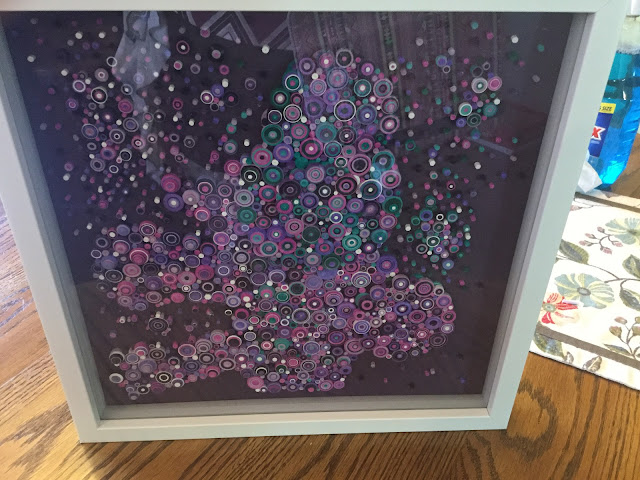 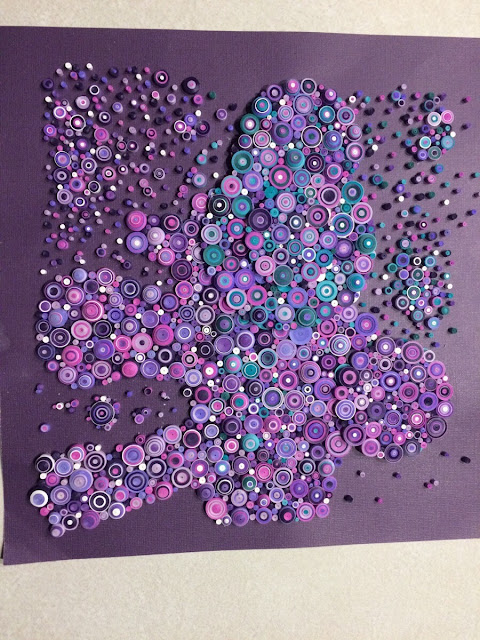 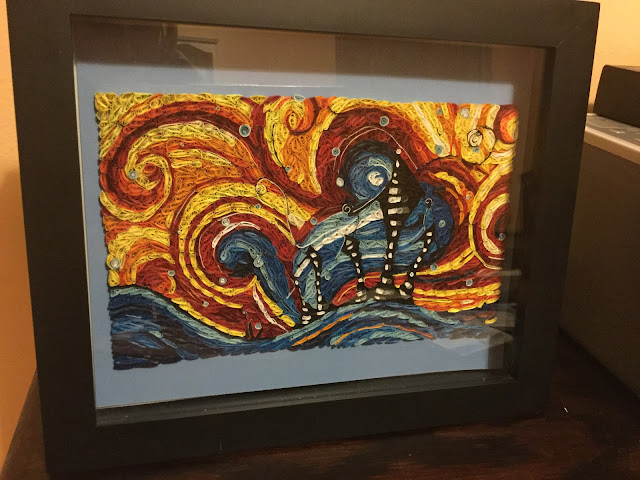 Posted by Rachelle at 9:36 AM No comments:

I haven’t posted in this blog in absolutely forever. There was a bug on one of my widgets that would automatically forward me to another site, so I couldn’t even use it on my iPad, which is the main device I use. But my husband figured it out for me!

These are two of the pictures I’ve quilled since I’ve updated my blog... I don’t do many small projects, mostly these big ones. I absolutely love these colorful scenes, and plan to do more. The night one is my latest one, which is 11” by 14”, and the other is about 8.5” by 11”.

Each section has a different coil shape, which further distinguishes the areas of the picture, which I quite like.

I quilled these over images I found and printed like I did for my other pictures. I found it is best to look up abstract or abstract painting to find a picture that is good for quilling. Anything that is hd has too much details to be conducive for quilling. 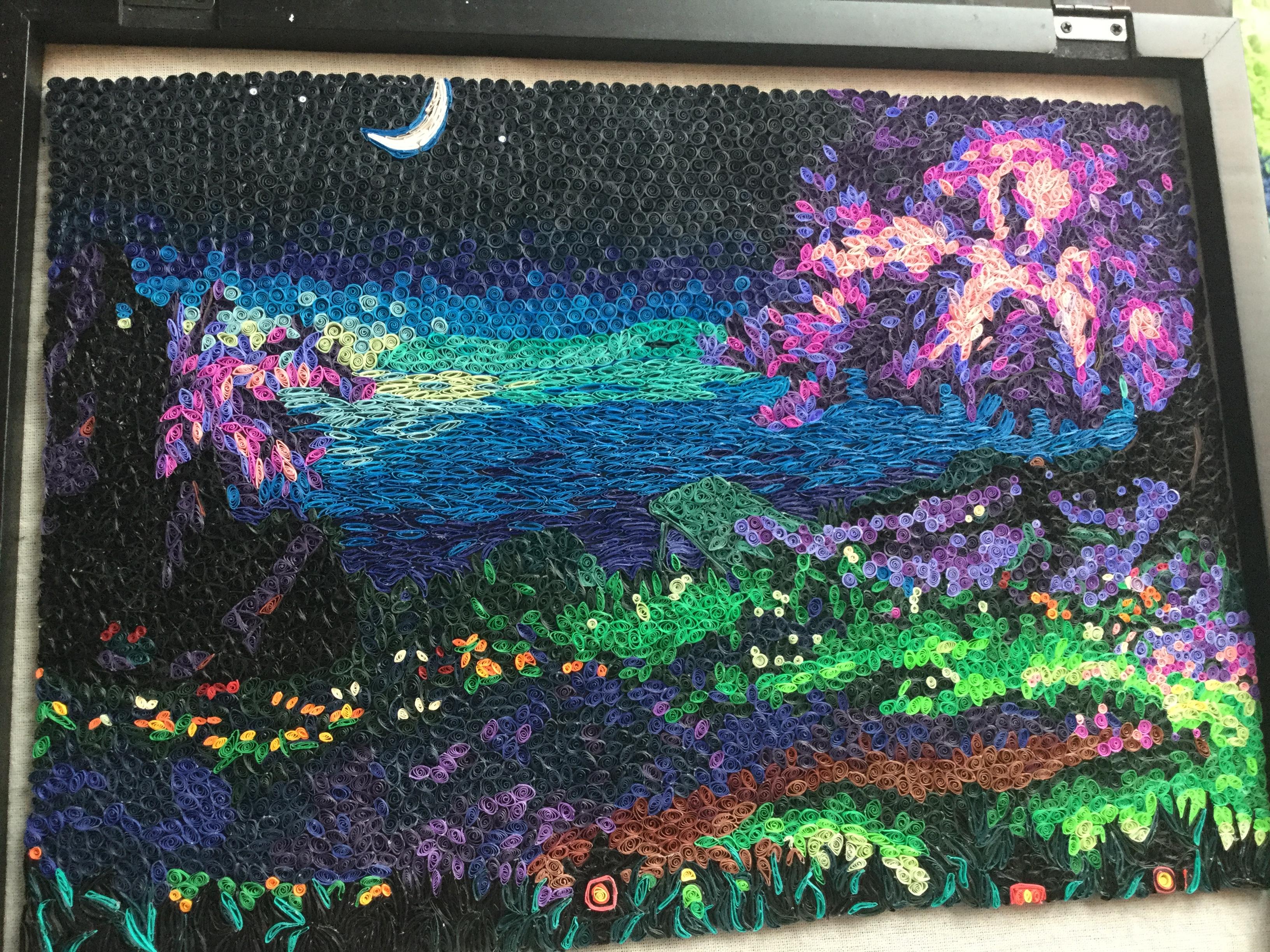 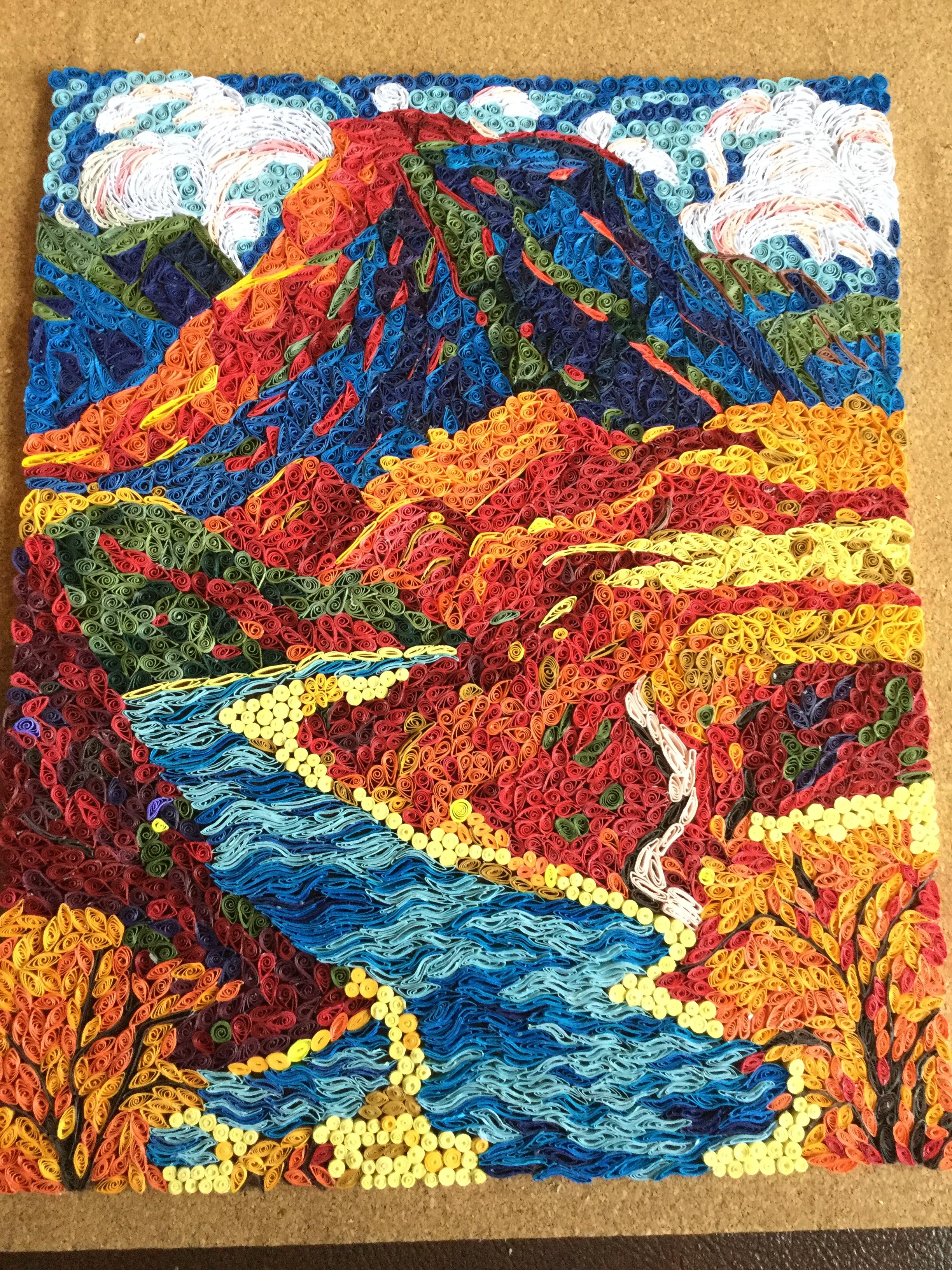 Posted by Rachelle at 9:25 AM No comments:

Hi everyone! I think at this point the people that are seeing my posts (though it's been so long), must be finding my blog randomly through Google or Pinterest. I have issues with posting a lot. A big part of this is because I'm lazy with quilling, and since I'm away at college now, it's kind of hard to get quilling in.  I did put in some command hooks though to hold the dowel with the strips I need for my projects! It has worked out awesome. Since I'm in the midst of working on something, it's not hanging up right now, but it's allowed me to keep my strips nice at school! (In other news, I'm turning 21 tomorrow woo! I usually wouldn't say since I'm sure no one cares, but I'm finally going to be a full fledged adult xD). 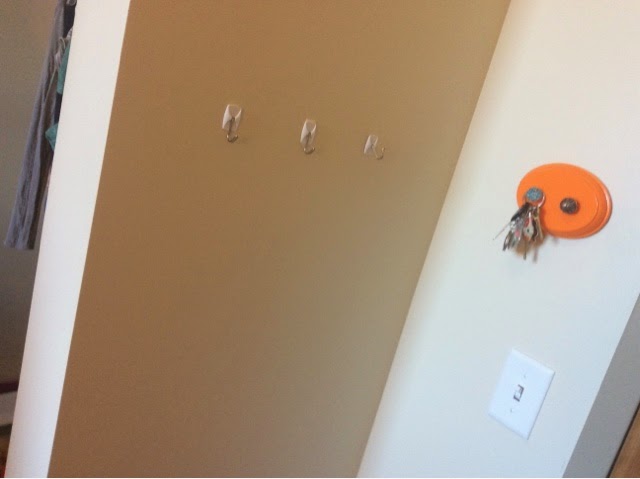 I like abstract colorful things, so months ago I finally found the perfect picture to base it off! Luckily I have lots of strip colors now but I still had to buy more! I will use them eventually! I think it looks like an abstract bird. I will just let the pictures speak for themselves, and I have one more thing to say a few pictures down. 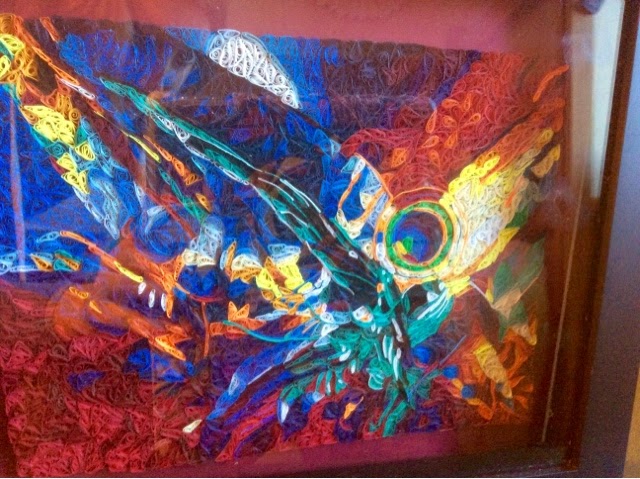 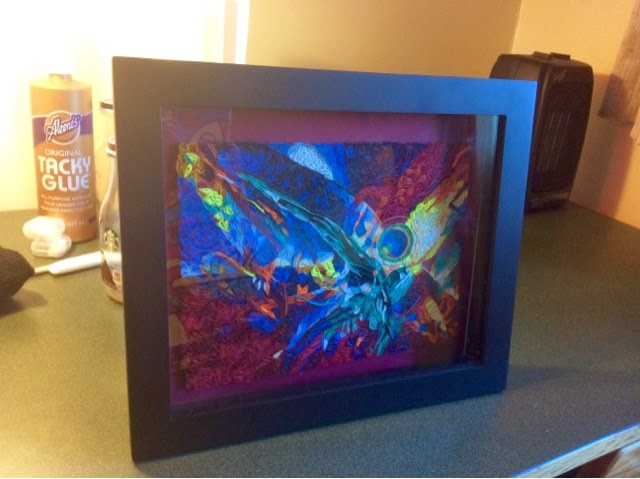 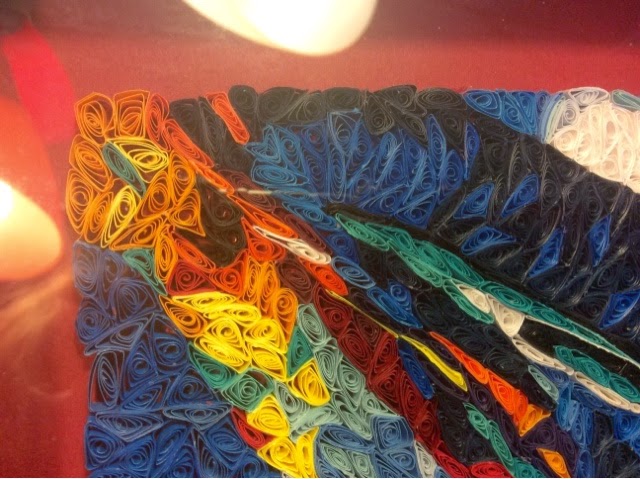 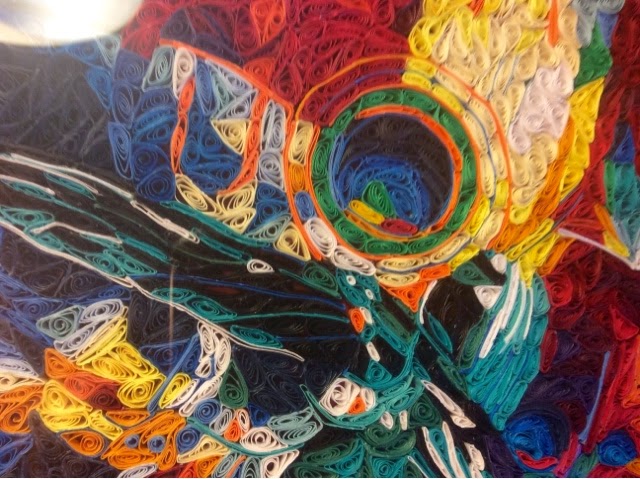 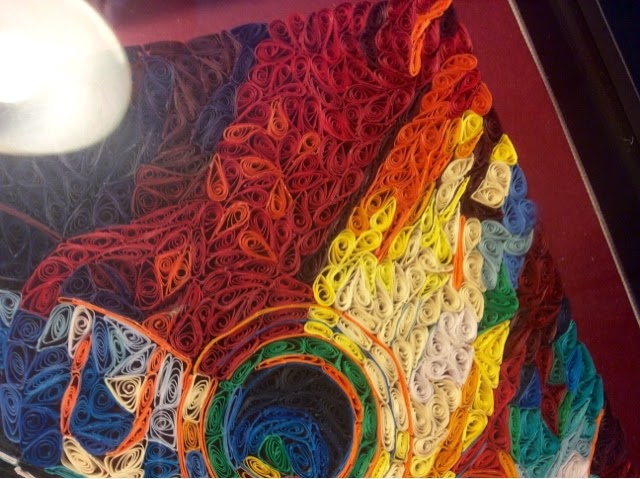 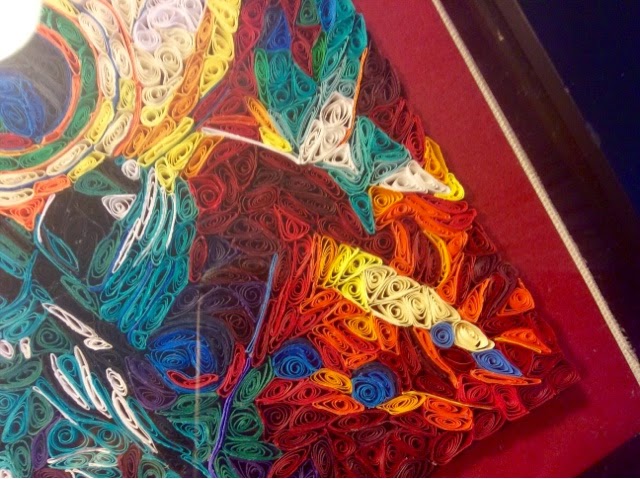 I wanted to hang up my quilled pictures in my room here. My first abstract tree hung up well with command strips, but while I was home for the weekend, this one fell! (Sorry for the crappy lighting, it's bright as day here, but my room is facing the north so sun doesn't shine in). 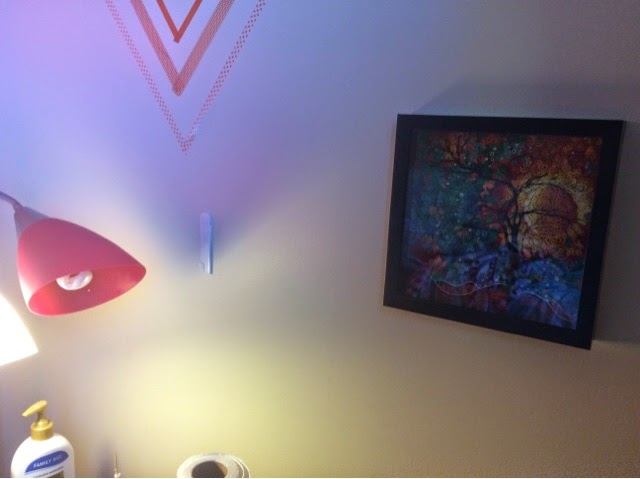 The problem is that the hanging up area goes in, and the edges aren't enough to properly hold the command strips! If only I could hang it into the wall. I have no clue how to hang it up, unless maybe instead of two command strips, I put on four. 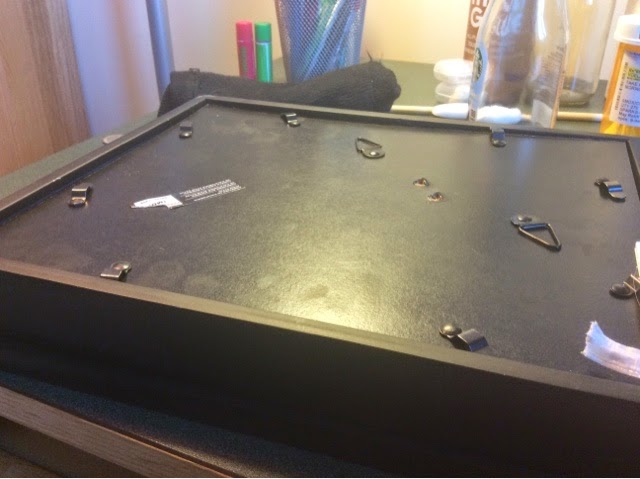 Posted by Rachelle at 2:24 PM No comments: 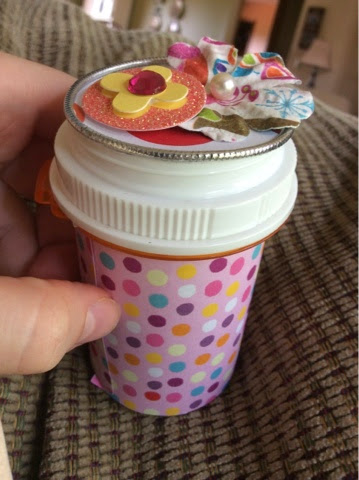 Hey everyone! Is anyone else obsessed with Pinterest? I've always been a crafty gal. You probably already know that though! Usually I use quilling as my creative outlet. But looking at Pinterest... There are so many other ideas for things that are useful!

Well, when I was cleaning up the cabinet, I thought to put some bobby pins in an old medicine container. It's free and it works. It isn't pretty. So looking on Pinterest got me inspired to morph my container into a cuter holder :). Not sure what else it could be good for, any suggestions?

-scissors and preferably a razor cutter.
-pencil
-ruler
-scrapbook/printed paper
-doubtless sided tape or photo slits
-old medicine container (preferably the kind you push down on the side instead of the top. You couldn't put anything on top if that was the case, and it's harder to open).
-findings/quilling do-dad

This is pretty straight forward. First you measure how tall the medicine container is. Mine was about seven centimeters. Then mark that length on the paper and cut it nice and straight. 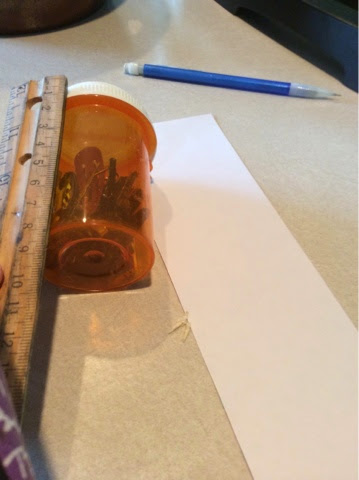 Start putting on the tape or photo slits. I started with just a few slits and started to put it on the container so that I know it's straight. Then keep adding them until you get to the opening part thing jutting out. You just cut down a little bit on each side of the paper between the thing (what is that even called?). Fold it a bit so it's easier to cut, and snip it off. Finish taping the paper on. 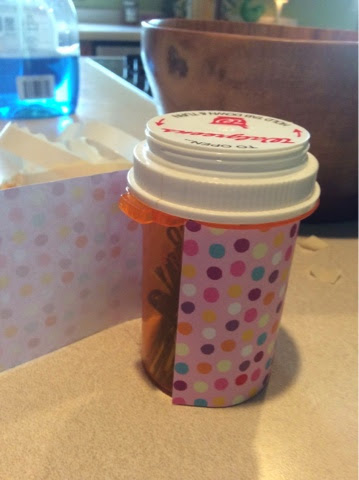 Then take off the lid and trace it on your paper. I chose a different paper, but if you put something on it, I guess that isn't necessary. 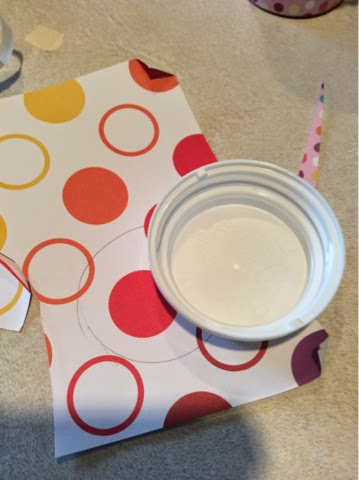 Cut it out, and Use more tape or photo slits to put it on the top. Mine isn't perfect, but that's not such a big deal. 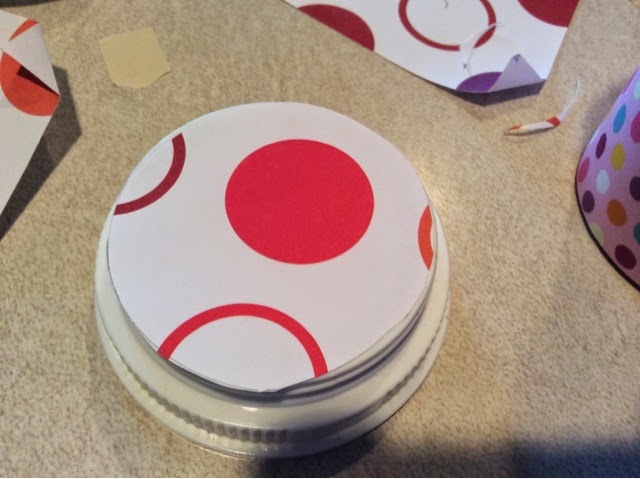 Now you can be done if you want. It's looking cuter already! 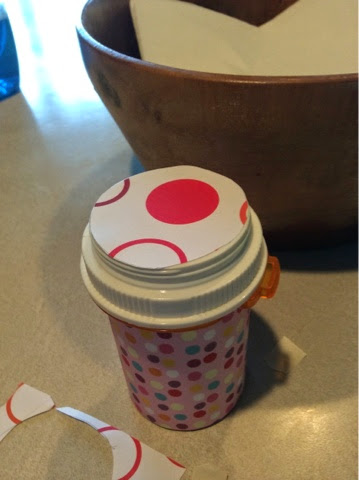 I have an amazing amount of crafty things, so I found a few things to put on the top. You wouldn't want it on its sides since you have to hold onto the side to open it. But not the top. I found some flowers and cord. I have a sticker maker which was a good adhesive for the cord around the top. You probably don't have that, in which case hot glue, done carefully, would probably work as well. 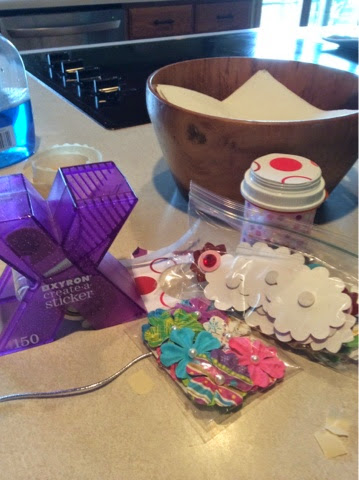 I used more photo slits to adhere the flowers on the top. You could quill something for the top if you'd like. 1/16 inch strips would probably look best (I usually just cut strips in half with precision scissors instead of buying narrow strips). Or maybe you're crafty in some other way. Anything would look cool on the top :). 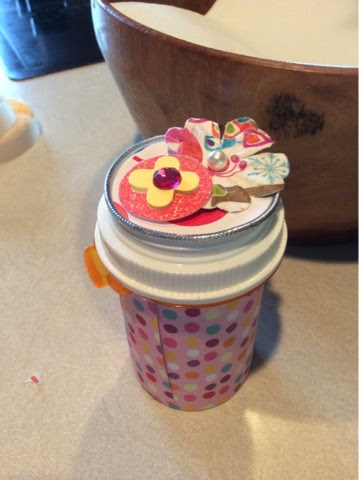 If anyone does this, I'd like to see what you've created :).

Rachelle
Hi guys, I'm Rachelle and I'm a 21 year old student. My blog is about quilling, an awesome paper craft. I've always been a crafter, so when I tried quilling, I liked it, but it wasn't necessarily love at first sight. I did get to a point, though, where I really started to like it, now I absolutely love it! Best craft ever, in my book. I especially like 3D quilling, but I enjoy regular quilling as well.

Looking for something specific?